Thank you for your interest in Historic Concordia Cemetery which has long been a part of Buffalo's history. Our collection of beautiful Victorian era carvings and monuments was one of the reasons cited for Concordia being added to both the New York State Register of  Historic Sites and the National Register of  Historic Places. In 2011, the volunteers of Concordia were recognized for their hard work by winning the prestigious Neighborhood Conservation Award from Preservation Buffalo Niagara. 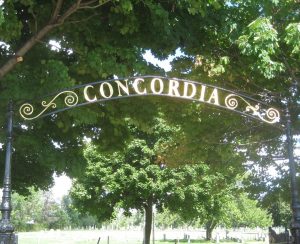 Encompassing 15 acres, the cemetery is the final resting place for thousands of early residents of Buffalo, including over 500 war veterans. Of these  about 150 are Civil War soldiers and include members of the famous Wiedrich’s Battalion NYS 1st Light Artillery which is memorialized by a monument at Gettysburg. Congressional Medal of Honor recipient John McHugh, who fought in both the Civil War and the Indian Campaign, is interred here. 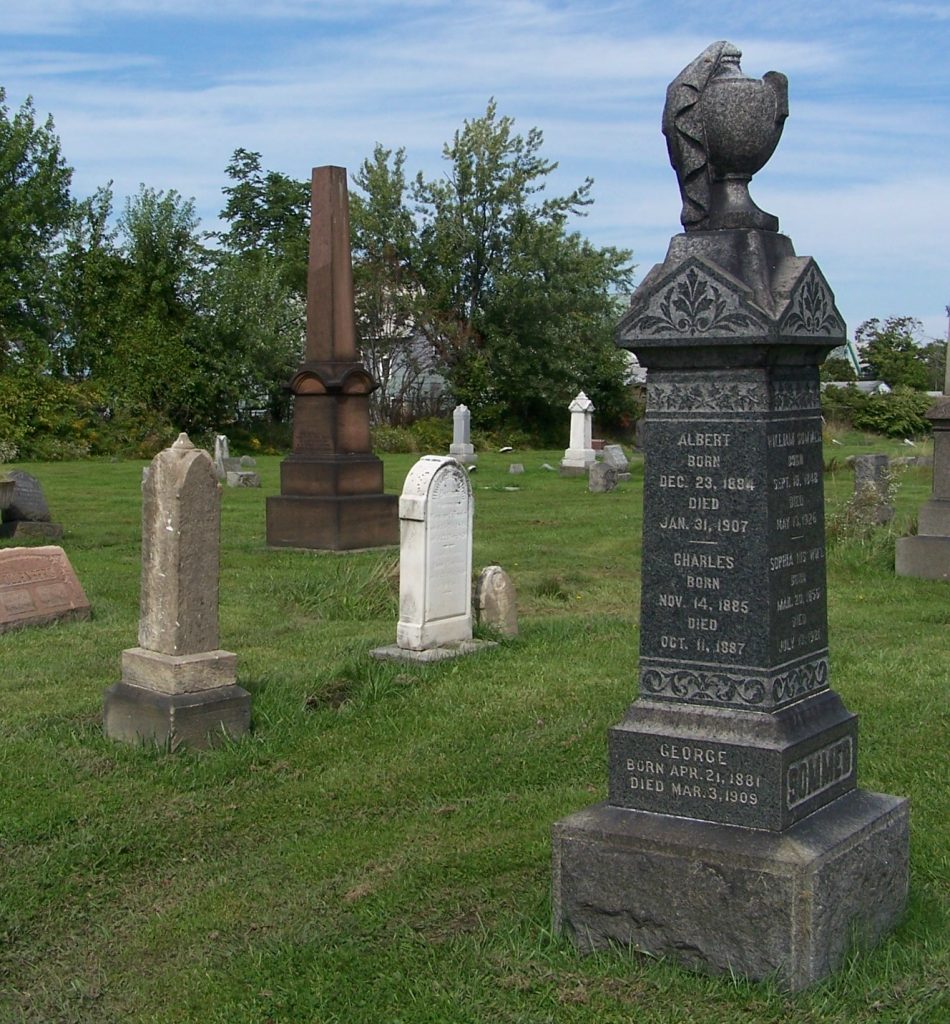 Buffalo's ever-changing diversity is mirrored in the people who are interred at Concordia. The earliest of those buried here were mostly of German roots, but the Great Migration brought African Americans from the rural South to northern industrial cities in the early 1900's, and thousands of these family members have been laid to rest here. Today, Concordia contains the remains of about 20,000 people of all backgrounds, cultures, ethnic heritages and religions.

Originally the cemetery was founded to contain the remains of German immigrants who came to Western New York in the first half of the 19th century and helped build Buffalo into the second largest city in New York State and the eighth largest city in America by the turn of the century.  Germans began arriving in Buffalo in numbers as early as the 1820s and the famine of 1846 and 1847 and the resulting revolution of 1848 lead to increased numbers fleeing Germany. Nearly 7,000 Germans were living in Buffalo by 1850, and by 1855 the city was half German. Although large numbers of immigrants from other countries continued to come, by the turn of the century Buffalo was 60% German.

The Germans who settled in Erie County were skilled working-class people who lived comfortable lives.   These artisans, tradesmen, merchants and laborers left their mark on the area, and their epitaphs are a reflection of their lives and values and show us a glimpse of the times in which they lived. Although certainly not wealthy by any means, these early settlers felt it was important to mark their loved ones’ graves with beautiful memorials.

Concordia contains many lovely and unique memorials including a cast zinc monument, a metal cross, some hand-made 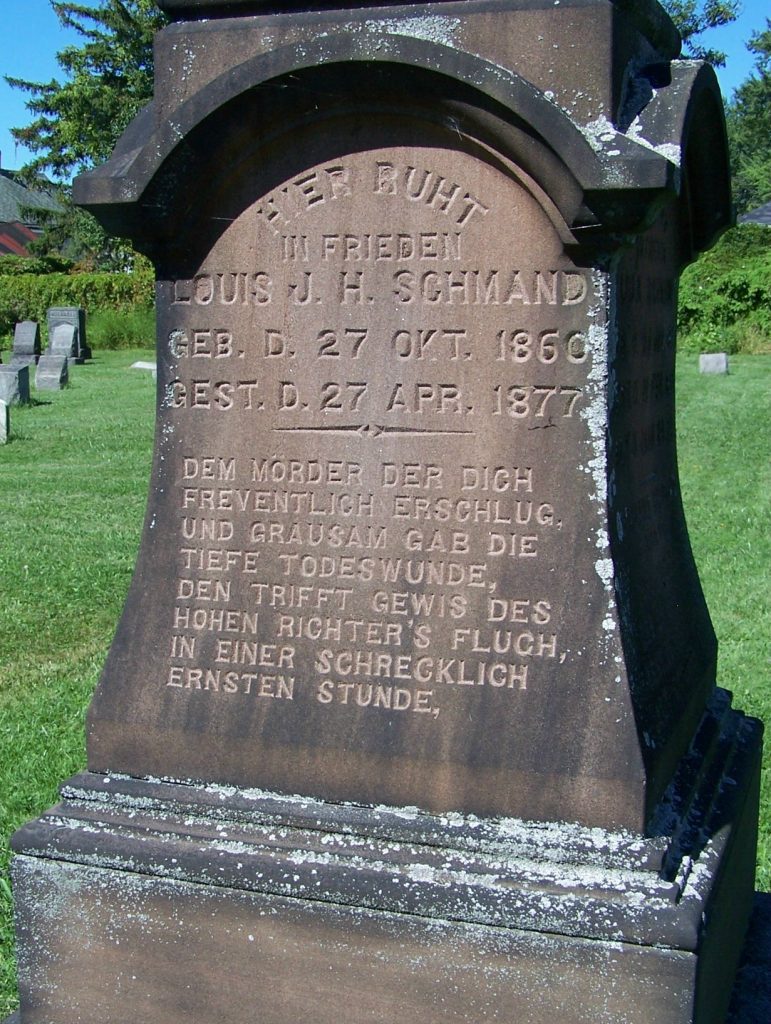 stones, many red Medina sandstone monuments, and many tombstones containing epitaphs, poetry and biblical passages in German or displaying biographical information such as the person’s birth place in Germany. The carvings on the tombstones reflect the Victorian perception of death as a peaceful sleep instead of earlier views of death as something fearful . Our monuments feature carvings of flowers such as passion flowers and lilies, cherubs, angels, ivy, willow trees, religious symbols, and lambs. In addition to tablet shaped headstones there are many obelisks common to Victorian era cemeteries.

The “white bronze” marker for the Wright family is a fine example of rare hollow metal markers that were made of cast zinc.  Zinc cemetery monuments were manufactured by Bridgeport Castings in Connecticut and were made in the same shapes and styles as marble or granite monuments.  Each of the four sides was cast separately. Bridgeport started manufacturing them in the mid-1870s and discontinued production in 1912.  All of these markers were custom-made, and were ordered by a customer from a catalog. After choosing the style and size, the customer could order as many images for decoration as he wanted.  The Wright monument displays an inscription on only one side; the other three sides display decoration.

The reddish colored monuments are made of Medina sandstone which came from quarries in nearby Medina, New York and was discovered during the digging of the Erie Canal. This sandstone,  located so near the surface it was easy to mine, and its  beautiful red color made it a much sought-after architectural material that was shipped all over the country. Medina sandstone can be found in the steps of the State Capital in Albany, in the streets of Rochester, Chicago, St. Louis and even as far as Havana Cuba; the sandstone was also used in the construction of Buckingham Palace and  Toronto City Hall.

Our most famous Medina sandstone monument is the Schmand family marker. What makes this this monument so unique is that we believe it is the only one in Western New York that has a curse on it.

Louis Schmand, son of Charles Schmand, the proprietor of a Buffalo paint and wallpaper store, was only 17 when he was clubbed to death in Euclid, Ohio in 1877.  The inscription places a curse upon the murderer of this young boy, a message addressing the killer and appealing that he be brought to a swift justice:

Translation:
Here Rests in Peace
Louis J.H.  Schmand
Born 27 October 1860
Died 27 April, 1877
To he who killed so violently
By striking down cruelly
From deep within my heart
You will be judged by a higher power
You are wished a curse on your soul

Once a showplace and pride of the community, Concordia boasted many large urns overflowing with flowers located in large rotundas, and a large wrought-iron Lichgate sign which greeted visitors. These urns are gone now, the cemetery having been decimated by vandals after it was abandoned in 2001.

In 2003 volunteers came forth and pledged to restore and preserve the sacred site. A new board took over that year  and began the task of finding records and finding and repairing tombstones. In the years since, gardens have been planted, the wrought-iron fencing has been repaired, a new reproduction of the original fence nameplate was installed. Volunteer researchers have spent countless hours creating. maintaining and updating a database.

In 2012, the Concordia Foundation, Inc. was established to support the cemetery through promotion, communication, development, education and events. A 501-C3 non-profit organization, the Foundation is also responsible for fund-raising and grant applications.

There is still much to be done to renovate this Buffalo gem to its former glory and volunteers are needed to help in the transformation. Renovation and restoration projects include locating and repairing headstones, landscaping, and historic research. Anyone interested in donating time or money is urged to contact us.

Concordia is a non-profit organization with no paid staff and we are dependent upon donations to stay open; to donate please click here.

If you are looking for information about who is buried at Concordia Cemetery, much of the information can be found on Find A Grave.